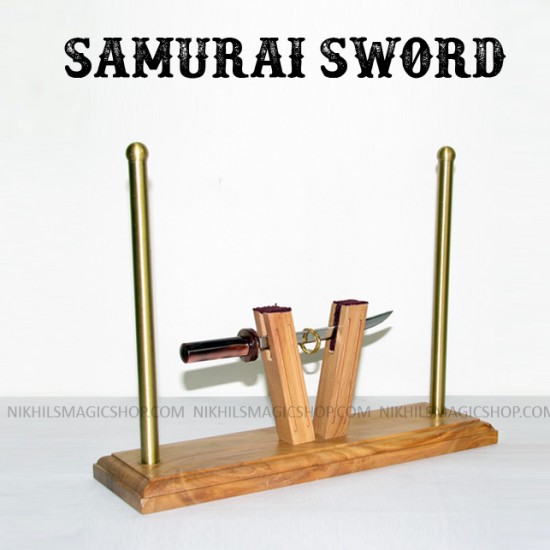 The mystery of the Orient and the intrigue of a wedding ring combine to produce a delicate, dazzling effect.

"Legend has it that the family of a fallen warrior of a little known Asian tribe would receive a replica of his sword. Mounted in a fixture such as this, it was kept in a prominent place in the family home. For the most part, the display would be cloaked in a protective cloth. (Performer places a silken bag over the display.) On ceremonial occasions, the bag would be removed, and as a gesture of continuing homage, loved ones would remove their rings and place them on the sword. Recently discovered writings suggest that, from time to time, examples of psychokinetic's would be observed. It's my intention to attempt such an experiment."

Inviting the spectators to examine the silken bag, the performer covers the sword with it. A borrowed ring, proffered by a willing spectator, vanishes. "Concentrate", says the performer, "Choose the moment. Make it happen on your command. Say 'Now'."

Then as the spectator says 'Now', the unmistakable ping of metal on metal is heard. The ring has arrived.

Immediately, the performer pulls the bag from the sword, and there, resting on the sword, which is itself locked in the holder, is the ring!

There is no way to describe the effect this has on an audience. It is pure magic, spell-binding and entertaining. The props are first rate; the effect, simple in execution. If you've never seen this live, you're in for a treat, and so is your audience. I can honestly say, this effect is worth twice the asking price. A guaranteed winner.

For More Details Refer our complete Refund & Exchnage Policy.
Tags: collectable
You can choose your currency from top menu 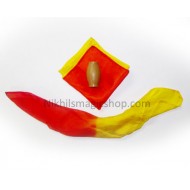 Dye Tube
Dye Tube With Silk You start by showing both hands empty. Then you take a red silk and push it into the top of your fist. When it emerges from the b..
Rs. 349.00
Add to Cart
Add to Wish List
Buy Now 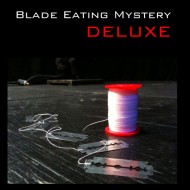 -20 %
Blade Eating Mystery
The Razor Blade Mystery is one of those Bizarre effects that has caught the imagination of performers and audiences over decades.Various methods h..
Rs. 249.00 Rs. 199.00
Add to Cart
Add to Wish List
Buy Now 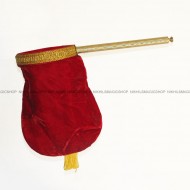 Change Bag - Golden
A regular size change bag with a golden handle. This is a utility prop of 101 uses, and comes complete with several dozen ideas for presentation.B..
Rs. 649.00
Add to Cart
Add to Wish List
Buy Now 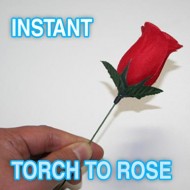