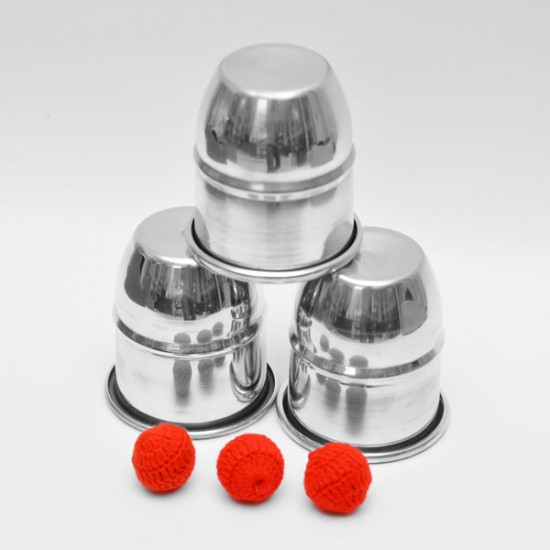 A basic routine is the triple penetration of the balls through the inverted cup and onto the table surface. One at a time, the balls are placed on top of an inverted cup, covered with a second cup, and caused to penetrate the cup and land on the table. This is repeated twice more with the two remaining balls until all three balls have penetrated the cup and gathered on the table.

A routine involving sleight of hand opens up more possibilities for the performer. The balls can appear, vanish, change colour, travel between cups, grow in size or change into completely different objects.

For the climax of the routine, the cups are lifted to reveal the magical appearance of totally different, and usually larger, objects. This surprise ending acts as an applause cue for the audience and punctuates the end of the routine. Often, multiple objects are produced from under the cups, such as four pieces of fruit, which cannot even physically fit back inside the cups after the routine.
this is all basic routine, many adds their own routine in this great classics of magic, comes complete set with instruction sheet

the aluminum used is high quality, shiny looks give you real magic touch!

Note : Magic Wand is Not supplied in set

For More Details Refer our complete Refund & Exchnage Policy.
Tags: cup
You can choose your currency from top menu

Airborne Glass Bottle Model
The performer pours liquid into a glass from a soda bottle. He "absent-mindedly" leaves the glass during the performance, and the glass stays suspende..
Rs. 119.00
Add to Cart
Add to Wish List
Buy Now