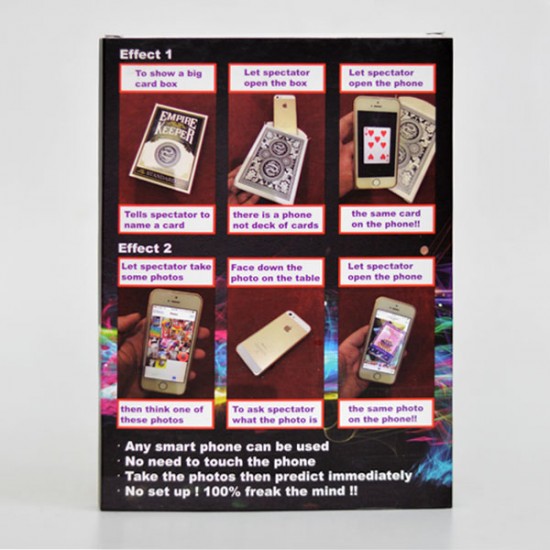 A Must-Have Ultimate Device for Mentalism Magic. More than 200 devices sold out in a day!

Phase #1.
Magician displays a card case and he explains there is his prediction inside.

Now, the magician asks the spectator to freely think of one card in his/her mind.

The chosen card is written on a piece of paper.

The magician opens the lid of the case and retrieves a playing card… NO, NO. Wait. It is not a playing card. What he retrieved out of case is a smartphone.

Then the magician asks the spectator to look at the screen of his phone….

WOW! The chosen card is displayed on the phone!!

Phase #2 (Phase #2 can be performed right after phase #1, without any re-set, another preparation, or any kind of interruption.).

Now magician asks the spectators to show their personal belongings on the table. The magician takes the photos and creates a new folder in the phone. These photos are placed into the folder. First, the magician decides which photo will be chose by spectator and he places the phone screen-down on the table.

Magician asks the spectator to choose one item from the photos he just took, then ask him/her to write it down on paper….

Finally, the magician asks the spectator to flip over his phone… WOW!! Magician’s prediction completely matches the chosen item!

As described above, chosen playing card, picture, etc.. can be predicted easily.

(NOTE) This device requires later than iOS 8.0 or Android 4.3. Please provide your own smartphone. The app can be downloaded at no cost.

Out Of Stock
Card & Coin ( Close-up ) Pouch
This is Magicians Must Have Utility Close up Pouch. This is not only perfect strolling magician's close-up pouch...but also one with a "Kicker Magical..
Rs. 549.00
Add to Cart
Add to Wish List
Buy Now

In the Beginning There Were Coins Starring Jay Noblezada (DVD)
The ULTIMATE introductory course in coin magic. Over TWO HOURS of TRAINING! Make the decision to master coin magic today! "Most mag..
Rs. 1,799.00
Add to Cart
Add to Wish List
Buy Now

Steel Blind Fold (with Vision Bag)
Over the years, magicians have performed many mysteries with their eyes blind folded. Several objects like bread, coins, dough, and wads of cotton, po..
Rs. 749.00
Add to Cart
Add to Wish List
Buy Now

Card Sword Deluxe
The Card Sword is one of the most dramatic and effective stage items you can perform with a pack of cards.The performer displays a pack of cards. ..
Rs. 2,659.00
Add to Cart
Add to Wish List
Buy Now

Edwins Everyone Wins Plus
The original effect “Everybody Wins” was marketed by the Supreme Magic Co. and has been described by its owner Edwin Hooper on page 76 of his book Edw..
Rs. 299.00
Add to Cart
Add to Wish List
Buy Now